The Ultimate Animation Guide by Fireart Studio. This Will Help You Understand Our Process Better

So! You need an animated video for your business. But you might be confused about differences in prices, and “why does this simple character rotation take so long to make?” or “why can’t we just change the camera angle on this shot?”. Don’t worry, this article is going to make it clear for you, and after reading it, you will know the secrets behind the animation magic.

Our basic process of creating animated videos is pretty stable:

In this chapter, we are going to go through all of them.

Storyboard. The most important step. On this step, we think about “What should we show” to the audience. This is basically a very rough comic book, where we think about all the visuals and directing stuff, like camera angles, transitions, etc. And the great thing about this step is that it takes little time to input any changes here.

Here is the example of the storyboard and finalized video. As you can notice, all the decisions were already made during storyboarding:

Illustration. During this step, we think about colors, shapes and overall design of the video. Usually, before finalizing illustrations, we do sketches for clients to approve. The complexity of illustrations affects the required time and budget. For example here is the simple illustration (simple shapes, simple colors): 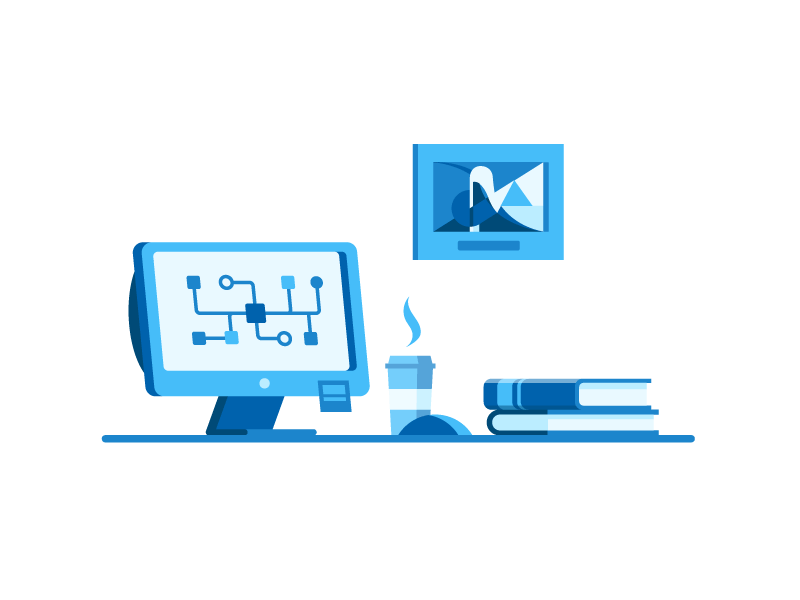 And here is the complicated one (not only shapes and colors are complex, but there are also a bunch of textures): 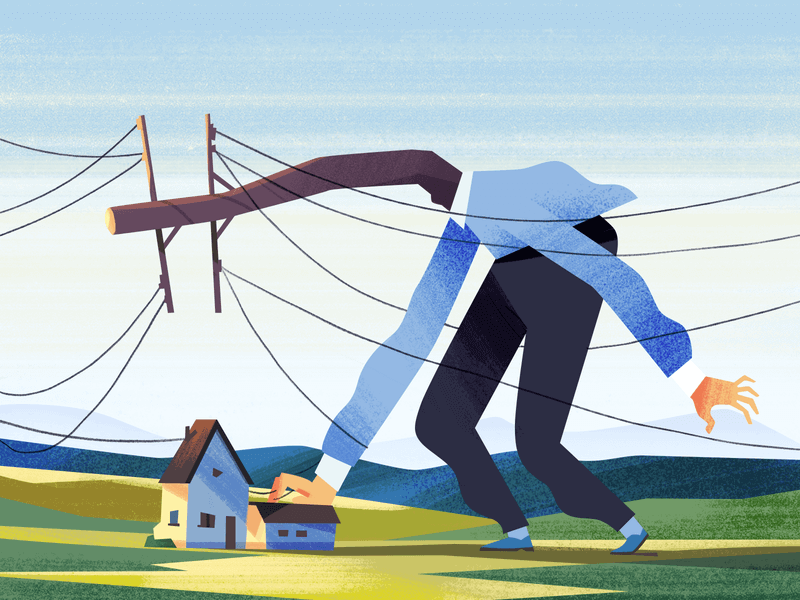 Animation. This is where we bring everything to life. Next chapters in this guide will describe this step in details.

In our production process, we use three different techniques and types of animation to achieve our results, which may cause differences in prices and terms. Here they are:

This way we can make everything to move. Here are examples of videos that we’ve made only by keyframing:

However, this type of animation has its limitations. For example, all objects that are moved – are basically flat.

And here is how this scene actually looks like. 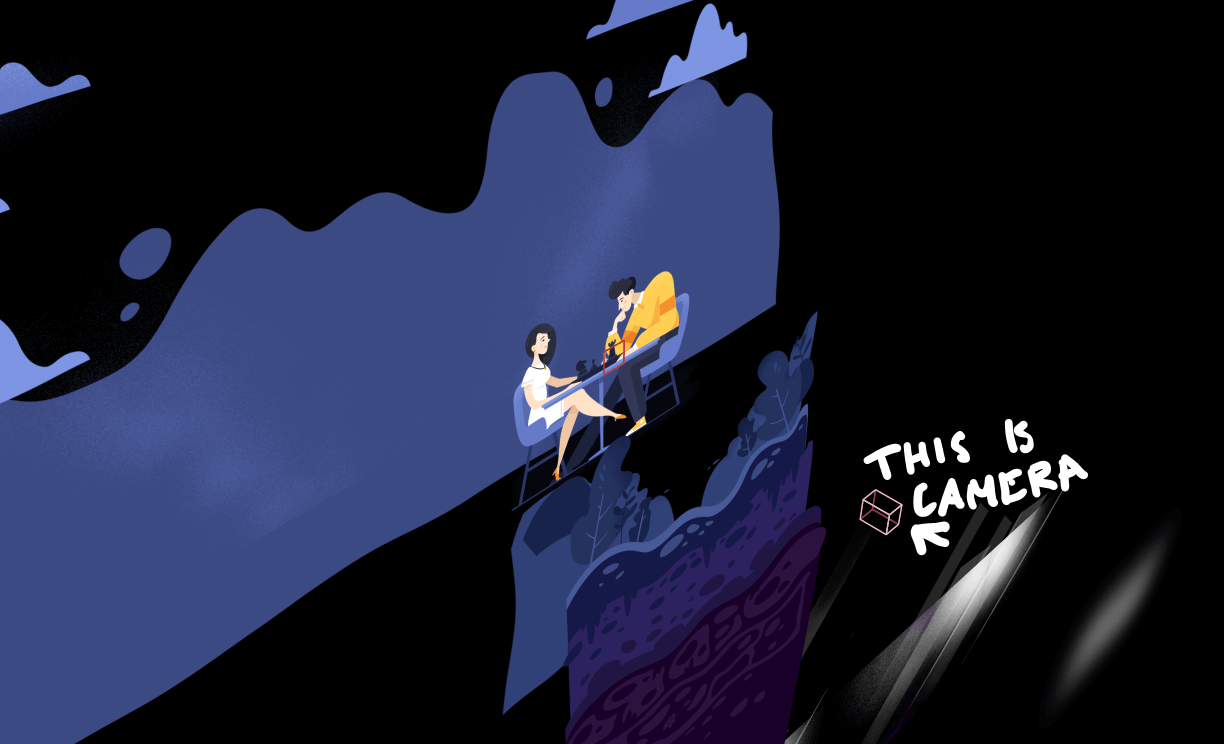 So, we can’t rotate the camera in 3D dimension and show this scene from a different angle, unless we draw it manually.

Another limitation of keyframing is that we don’t have the ability to animate really complicated stuff. For example, it would take forever to animate that kind of hands with keyframing.

Because hands are incredibly complicated objects, and in this scene above they change poses, rotate and behave in a natural way. Keyframe animation would not allow us to achieve this result. But how did we do that? Well, we just had to draw every frame manually and it’s called frame-by-frame animation.

Or traditional animation. That’s how our ancestors had to do it – by just drawing every single frame manually (like we did with hands above). It may seem that this technique is outdated, but these days traditional animation became really-really trendy. Because it not only allows to animate literally ANYTHING without thinking of technical headache like keyframes and rigging (we’ll talk about rigging later), it gives a very cool feeling to the visuals, makes it more… alive.

Also, since we don’t have budgets and amounts of time as Disney had 30 years ago, it’s a common practice to animate not every single frame (there are 24 of them in ONE second), but every second frame. In other words – animation on 2’s. So there will be 12 drawings per second, not 24. This “lifehack” saves 50% of the time without really affecting the result, and it’s being widely used in studios all around the world.

Anyways, this technique has absolutely NO limitations, because everything can be drawn. The only flaw that it has – time. Frame-by-frame animation is VERY time consuming, and it takes more people to work on it, and, obviously, a bigger budget is required. Also, it’s much harder to implement any changes to it after it’s done.

Here is one more example of how helpful frame by frame animation is. With keyframing, we could animate it only in the pose that was drawn by our illustrator. But if we want to do some interesting movement with rotating hand around itself, it’s very frustrating to do in After Effects.

And as you can see, it’s flat:

And here, by drawing the animation of the hand frame by frame, we add “depth” to the hand, and it now feels much better than the previous example.

Here are examples of videos where we used frame-by-frame animation:

Sometimes we have to do very complicated camera angles and camera movements. Or we have to rotate objects very precisely in 3D space. In this case, we are going to use a little bit of 3D. Because it’s faster to rotate and render a car, than drawing it frame by frame or making a technically complicated fake-3D thing with keyframing.

The basic process behind 3D is pretty straight forward:

Modeling. We basically create an object.

Texturing. We color the object.

Lightning. We add lights and shadows.

As an example, here is the gif that we’ve made for Abax. Everything is drawn in 2D, but the car rotates in 3D space, so we had to model it:

And, as for complicated camera movements, here is another example of 3D motion graphics that we’ve made:

But mostly we use 3D for little parts of our videos, where proper 3D objects required, like here (everything is 2D, but cubes had to move and rotate in 3D space):

Overall, 3D is a very powerful tool for animation, but it requires huge technical knowledge and skills to master it.

2) Rigging. Rigging means preparing the drawing of the character for the animation. So the animator would be able to manipulate character with convenience. This can be achieved with setting controllers, deformers and all that boring technical stuff, which allows manipulating character like a puppet.

There are different types of character animation for explainers in terms of difficulty (we are usually making characters by using keyframing and frame-by-frame for different parts):

1) Simple. Character is drawn in one pose, and being animated in this one pose. There is no crazy head turns, pose changes or emotional facial expressions. For example – the character is sitting in front of the computer and typing something. That’s it, this is simple character animation that does not require any complicated rigging or huge amounts of time to animate. Run cycles, walk cycles also count as simple animations.

3) Advanced +. If a character runs, then stops, turns around, checks his phone, can’t decide which way to go, cries, and then walks away while being very sad – it’s advanced+ character animation. Because it requires even more complicated rigging, which allows turning the character back and forth, it also requires not only body mechanics animation but also acting. This kind of character animation may require using the frame-by-frame technique for some parts of the body because turning character around in 2D is tricky.

Here are some answers to the not-really obvious question, which our clients ask:

Why can’t we change the camera angle, to show character from a different angle

Because it’s only possible in 3D. In 2D, everything is flat. And “a new camera angle” requires absolutely new illustration, new rigging, and new animation. 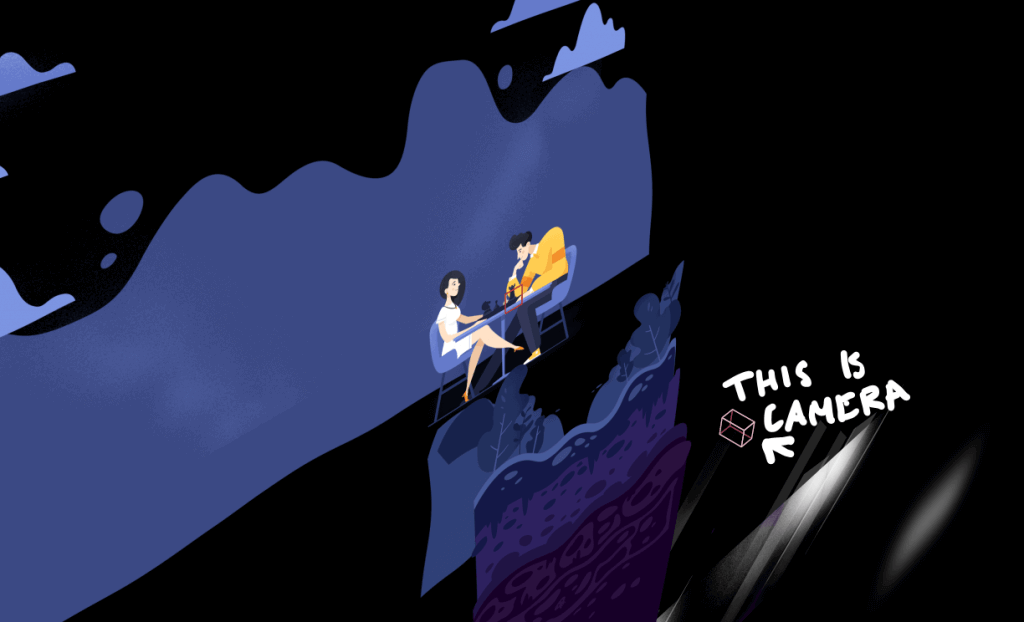 Why it’s better to not to move the scene’s chronological order?

For example, if you want to move a scene from somewhere in the middle, to the beginning of the video, it does not only break the structure of the script but also messes up transitions, timings, and the whole video. Because we are thinking about this stuff on the “Storyboard” stage, so we’ve got to stick to it. Sudden changes like “replacing scenes on the timeline” drastically affect the quality of a video.

We want to change the voiceover, so it would be slower/faster. Why can’t we do that after the animation was finished?

Because it requires full revision and remaking of all animation. If we’ll just make the whole video slower (or faster) to fit it to the new voiceover – it would look bad. So it’s important to keep the voiceover as it is after approving it on early steps of production.

Why can’t we change the character design and just apply current animation to him?

We can if changes are very minor – like colors, minor changes of hair-clothes. But if you want to change all proportions of the character, it would require a new rig and remaking of the animation.