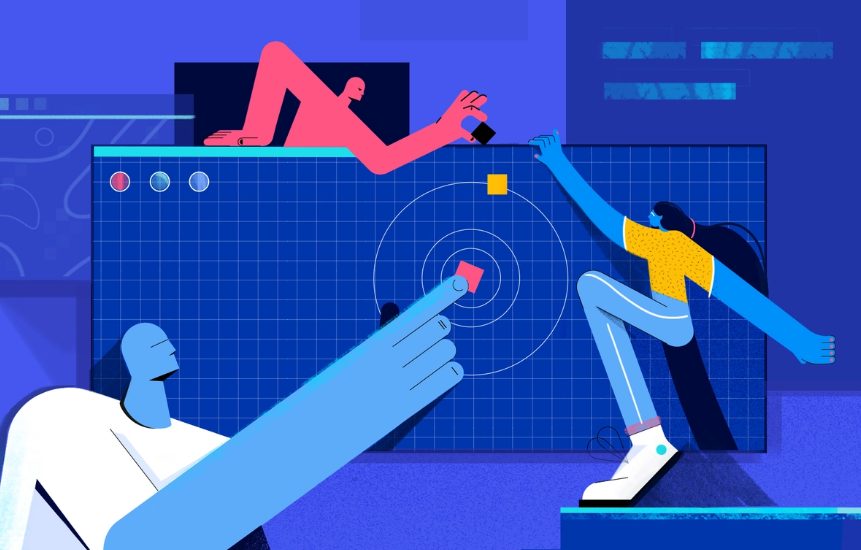 Frontend frameworks are a great kickstart when building a modern web application. Due to their wide variety, the developer may face the problem of…

What are Frontend Frameworks and How Do They Work?

To begin with, a frontend framework is a platform that provides a set of tools, libraries, and ready-made modules for developers to write their websites and applications. Though the majority of them contain predefined classes or functions to implement, you may add your own code to what is already presented in the existing framework for specific tasks.

They say the websites built on frameworks have greater accessibility, better responsiveness, and greater compliance standards. Besides, developers add their knowledge to the framework libraries as long as they use it, so they are self-taught systems.

Do not forget that JS libraries are constantly under development and offer more and more new features and extensions. Some of them are perfect for creating landing pages, while others are ideal for large-scale projects. The choice among them always depends on the problem that needs to be solved, and you should not rely on the popularity of this or that framework, but on the effectiveness of its implementation.

Most frameworks allow free and open-source code to use. This makes it possible to write programs in real life, in some cases – directly inside the browser. Since this significantly speeds up the creation of an application, it accordingly reduces the price of the web application itself.

Frameworks significantly improve productivity and all thanks to optimized processes. A set of optimized and well-structured templates are more accessible to apply rather than writing hundreds of lines of codes and fixing them.  The products turn faster and more responsive due to a well-structured code in their core.

If we take the trending JavaScript frameworks, they may boast solid support of a large community on the network and an iron security system, which is a must for sustainability.

Vue is one of the most popular front-end frameworks of the day. It is simple and straightforward compared to sophisticated Angular. In addition to being not too heavy, its main advantages are the visual Document Object Model (DOM), the component approach, and two-way data binding.

Vue is universal, multitask, and can handle both simple and dynamic processes with ease, from building web and mobile apps to progressive web apps. Vue js development services are much sought-after by the modern businesses for a variety of complex products.

React, one of the easiest frameworks to learn was developed by Facebook to fix maintenance issues due to the constant addition of new features to the application. What’s React? Modern open source React language is easy to learn, and the framework is distinguished by its virtual document object model (DOM), which offers exceptional functionality. React is the perfect platform for anyone expecting a lot of traffic and needing a stable platform to keep it going.

React js development services are something our development team may offer for quick and effective product development.

Also, read on what’s better? – React Native vs Swift: Which to Choose for an iOS App

Introduced in 2006, jQuery is one of the earliest front-end frameworks, but it is still widely used in today’s technology world. In addition to being simple and easy to use, jQuery also has a minimal need for extensive JavaScript code.

Over the long period of its existence, a large jQuery community has been successfully formed.

The list of the most popular front end frameworks wouldn’t be complete without Angular. Angular is the only TypeScript-based framework on the list. Officially launched in 2016, Angular was developed by Google to bridge the gap between growing technology demands and traditional concepts, and it pays off.

Unlike React, Angular is unique in its two-way data binding feature. This means that there is synchronization between the model and the view in real time, with any change in the model instantly reflected in the view and vice versa.

It allows you to build lightweight and fast applications. It is a modern, simple, fast and non-blocking platform. GoDaddy and Paypal are just a few of the big names using Node.js as their tech stack. It will be ideal for I/O and streaming applications. Software created with Node.js can run on multiple hosts. Fast servers enabled. However, there is nothing to do without tests in Node.js.

Do not forget to read on How to Select a Web Framework For Your Project (Java)?

Svelte is based on Reactive.js and is a relatively new framework, released about five or so years ago. It differs from most popular frontend frameworks due to the ability to be used directly in a web browser. It does not yet have its own community but may boast a range of advantages:

Difficulties in solving certain problems arising during the study remain. Svelte is also quite not used for large-scale projects.

This one is also a relatively young top frontend frameworks with support for all modern browsers.  It contains a large number of components to create a great interface for a mobile app or a website. It may well compete with Bootstrap and is also known as one of the best UI technology.

The best front end web framework choice sometimes is not quite easy to make.

If you need to decide on what is a framework for your product, need some non-standard solutions or complex processes to deal with, feel free to contact us for a professional consultation on tech stack, UI/UX, and your product launch.

They say the websites built on frameworks have greater accessibility, better responsiveness, and greater compliance standards. Besides, developers add their knowledge to the framework libraries as long as they use it, so they are self-taught systems