In this article, we will describe 10 programming languages that are the most trending now. Which one is better for your business? Read on…

Top programming languages that will rule in 2022

In this article, we will describe 10 programming languages that are the most trending now. Which one is better for your business? Read on and find out!

Nowadays, informational technologies evolve faster than ever. 90% of the world’s data was generated within the past two years, and it seems that each year the numbers will grow. As the IT sector is developing like lightning, the demand for specialists is also increasing rapidly. The U.S. Bureau of Labor Statistics says that the employment of software developers will grow by 22% in 10 years (2019 to 2029), which is much faster than the average for all jobs. We should accept that programming language trends will keep growing, and in a couple of years, we might end up in a situation when demand exceeds the supply.

Every company needs a software developer, whether in-house or outsource. Today, it’s fundamental for any business. Technologies are an integral part of any industry. If you want to keep your company up to date, you need to hire a software developer who works with top programming languages. You can also hire an outsource developer or even the whole team – everything depends on the scope of work to do and the goals you need to accomplish.

Professional developers know how to write a code that will turn into compelling features that your customers will love. But finding such a specialist is a challenging task. When choosing a specialist or an outsource team, you may get lost with the number of trending programming languages. Just like technologies develop, new programming languages appear all the time. Some of them disappear unnoticed; others become popular among the coders.

It’s crucial to keep in mind that different programming languages should be implemented for different use cases. So before you hire someone to do the back-end things, you need to know what kind of developer you actually need. For the specialists who work in IT, learning new, future programming languages (and in many cases more complicated) is obligatory if they want to grow professionally and, of course, if they want to earn more.

This article will cover the top programming languages of 2022 and discuss the future of programming languages. We will describe their features and explain how you should use them and why to learn them. This information will be useful for developers-to-be and professionals who want to change their direction in software development.

What are the top programming languages of 2022?

As we have already mentioned, programming languages can be less and more complicated. It’s better to start with C / C++ as this is the foundation of the whole software development. For advanced users, JavaScript or Python will be a better choice. According to Fullstack academy, if you have determined your career goals, you should concentrate on the following: 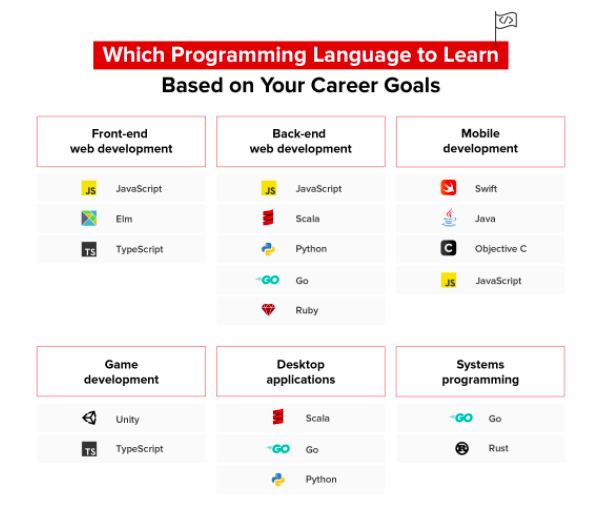 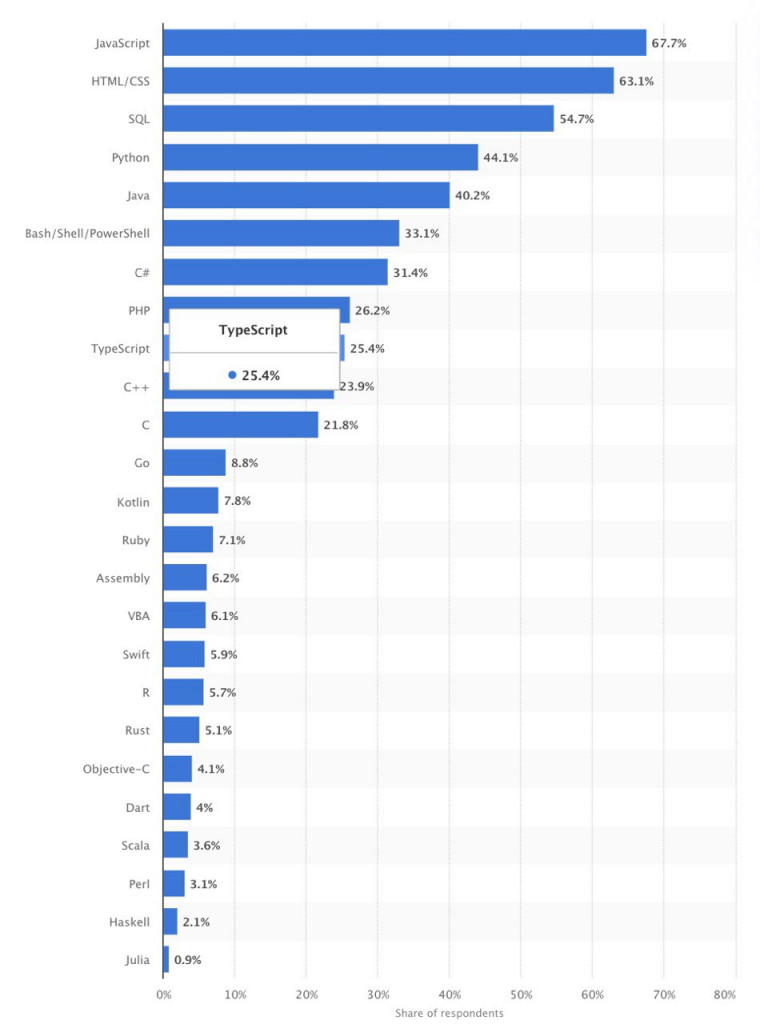 Let’s concentrate on the trending programming languages that are currently in high demand.

According to Statista, Python takes 4th place as the top programming language with 44.1% of developers who choose it. Python is an interpreted and object-oriented language. It is also one of the high-level modern programming languages with dynamic semantics. It was developed in the late 1980s by Guido Van Rossum at CWI in the Netherlands. In 1991, it was first released to the public. Readability became the philosophy of Python. Such online giants as Google, Pinterest, Wikipedia, Yahoo!, Instagram, YouTube, DropBox, NASA, ESRI use Python for development. Python has a versatile nature. Therefore it is used in different spheres for various needs, like developing frameworks, micro-frameworks, and advanced content management systems, creating desktop GUIs, scientific and numeric computing.

Kotlin is not listed in the best new programming languages according to Statista, but its popularity for developing Android Apps is fantastic. It is also used for JVM and is 100% interoperable with Java. The history of Kotlin started back in 2011 as a new language for the JVM. On February 15, 2016, Kotlin v1.0 was released by JetBrains. Kotlin is a ‘modern, concise and safe programming language’ as the language creators say. Such companies as Udemy, Slack, Tinder, Alibaba Travel use Kotlin for development.

JavaScript takes the leading position in the rank of most demanded programming languages with 67.7% of developers who choose it. JavaScript, also known as JS, is a multi-paradigm and dynamic language, which supports object-oriented, imperative, and declarative styles. Therefore, this is a functional programming language. It is used both for web pages and non-browser environments.

JS was released in 1993, and now it is used by such companies as Microsoft, PayPal, Netflix, Uber, Facebook, eBay. It is still one of the classic languages that can be a decent competitor for the best new programming languages. The demand for JavaScript developers is always high. This language covers multiple business requests and helps in solving various needs.

Swift is the main platform used by developers to create apps for mobile. This time, for iOS. As you have probably noticed, new computer languages used for specific needs (like mobile app development) are less popular than languages that can be applied in various spheres. Therefore, Swift gets only 5.9% by Statista, and, in this case, it means that this language does not serve multiple purposes. Swift is a programming language with concise syntax and various features that developers love. One of the biggest advantages is that Swift is that it is design-friendly, and at the same time, it’s fast.

Swift is a new programming language – its development started in 2010, and it was first released in 2014. However, a huge number of companies use it to create apps for iOS. Slack, Uber, Robinhood, Bitpanda, Accenture are only some of the businesses that trusted their iOS presence to Swift.

Some developers say that ‘Go language is the C for the twenty-first century when it comes to syntax.’ Go takes 12th place in-demand programming languages rank by Statista, and it is chosen by 8.8% of developers. It is an open-source programming language that allows creating efficient software. Robert Griesemer, Rob Pike, and Ken Thompson from Google officially released it in 2009, though it was developed in 2007. Currently, Go is one of the most in-demand coding languages in Silicon Valley. Go is used by Google, Uber, Twitch, SendGrid, Dropbox, Soundcloud.

Currently, such companies as Airbnb, Netflix, Google, Pinterest, Instagram, Spotify, Amazon use Java in their development processes. This is surely one of the most demanded programming languages, and it seems that it will be in demand for many years.

Number 13 in Statista best new programming languages rating, but perhaps number 1 in developing web applications. Like Swift and Kotlin, Ruby is used for certain clear goals; therefore, the number of developers who chose it is lower than multi-purpose JavaScript and Python. Ruby is focused on being simple and productive. It’s dynamic and open-source – many developers appreciate these two features. The distinctive feature of Ruby is its elegant syntax. Ruby is a ‘Japanese’ programming language developed in the mid 90’ies. Airbnb, Groupon, Github, Couchsurfing, Shopify, Ask.fm, Dribbble, Twitter use Ruby in their online presence.

C / C++ are known for a fantastic number of resources to work with (libraries are compiled since 1972 and 1985 correspondingly) and offers impressively fast execution of programs. Also, C / C++ is used as the foundation for understanding other languages. Evernote, LinkedIn, Microsoft, Opera, NASA, and Facebook use C / C++  in the development.

C# takes the 7th position in the programming languages rank with 31.4% of developers who choose it. Many newbies and experienced developers choose C# as their key language. C sharp is chosen by the leading companies such as Microsoft (who is also a developer of this top programming language), Delivery Hero, Accenture, Stack Overflow, ViaVarejo, and many others.

Time to make your coding choice

In this article, we’ve described only some of the programming language trends. But with the development of the IT sector, the number of languages that are in demand increases every day. If you are planning to build your career in information technologies, don’t stop learning new languages. Therefore, you will always be up to date, and any job application will be successful for you. Of course, a perfect knowledge of all programming languages is impossible. But it will be good to know at least some basics to switch to development on this language easily.

If you are a company, choosing a proper programming language for your business goals is a huge responsibility. If you are not ready to take this responsibility, Fireart Studio will do that for you! We’ve been working with different developers and know for sure what exactly your business might need. Leave us a message or give us a call so we could discuss the details. We will gladly tell you more about choosing the right team for your business goals and saving your time and money on software development.